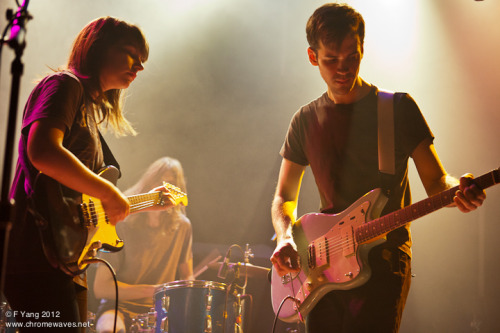 Chromewaves blogger Frank Yang’s week spotlighting up-and-coming Toronto acts continues with Alvvays, a jangle-pop four-piece that he says would not be out of place on the roster of Slumberland Records.

“They capture that ‘80s c86 sound,” Yang says. “Lots of hooks, right sounding guitar and vocals, all of that. They could tour with Pains of Being Pure at Heart and Veronica Falls and it would fit perfectly.”

The band – pronounced “always” but spelled with two V’s (“because this is the internet,” says Yang) – posts a steady stream of stand-alone singles on its Soundcloud page, but never as a full set of music. As soon as a new song goes up, an old one comes down.

“There may be a full EP recorded,” Yang speculates. “[The band] just hasn’t committed to putting a release out. But when these all come out in some sort of physical or packaged form, I’m sure it is going to be fantastic.”

Listen to the band’s latest single, “Adult Diversions,” below, and download it by right-clicking here.

Today On The Cafe We Were Joined By Memoryhouse